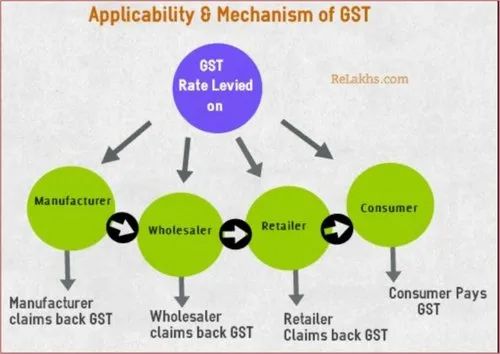 From 1 July 2017 the Goods and Services Tax (GST) will replace current indirect taxes and is the most iconic structural financial reform undertaken in India.

GST will be levied on Goods and Services. It aims to replace all the various indirect taxes and bring them under one umbrella to make compliance easier.

It will replace the following taxes:-

Goods and Service Tax (GST) is one of the most significant tax reforms introduced in the history of the Indian fiscal evolution. With a singular impact on the economic growth of the country and the way business is done , it is expected to achieve the following:

Goods and services will be taxed by both the governments

Our country is a federal country, where power of both centre and state to levy and collect taxes has been divided and outlined in the Constitution of India. A dual GST will be keeping the Constitutional requirement of the federalism.

The central and state governments will levy GST simultaneously, on a common taxable value, on the supply of goods and services.

GST, is expected to bring a significant shift from origin-based taxation to a destination-based tax structure. This is likely to impact not only the operating business models but also the revenues of the centre/states. It has the potential to impact cash flow, pricing, working capital, supply chain and IT systems and hence provides an opportunity to transform your business.

In the case of imports and inter- State supplies, an Integrated IGST (GST) shall be levied by the central government, proceeds of which will be shared by the central and the recipient state government. IGST is an Indian innovation which would help tax move along with goods/services, across states and therefore reduce refund situations at state borders.

GST is a consumption based tax i.e. the tax should be received by the state in which the goods or services are consumed and not by the state in which such goods are manufactured. IGST is designed to ensure seamless flow of input tax credit from one state to another. One state has to deal only with the Centre government to settle the tax amounts and not with every other state, thus making the process easier.