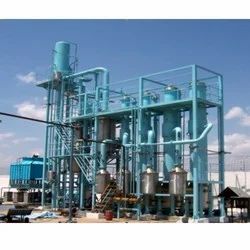 A Multiple-effect Evaporator, as defined in chemical engineering, is an apparatus for efficiently using the heat from steam to evaporate water. In a multiple-effect evaporator, water is boiled in a sequence of vessels, each held at a lower pressure than the last. Because the boiling temperature of water decreases as pressure decreases, the vapor boiled off in one vessel can be used to heat the next, and only the first vessel (at the highest pressure) requires an external source of heat. While in theory, evaporators may be built with an arbitrarily large number of stages, evaporators with more than four stages are rarely practical except in systems where the liquor is the desired product such as in chemical recovery systems where up to seven effects are used.

These evaporators are designed from finest grade materials and most sophisticated techniques in seven evaporating effects. This system offers superior viscosity to treated heat sensitive products including proteins and enzymes. According to the feeding materials,viscosity and properties, these can be fed into the most suitable one effective systems to ensure excellent result. 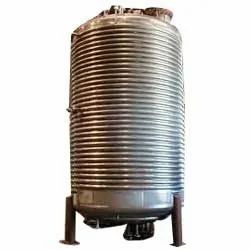 We mfg all types of liquid mixing and liquid mixing equipments from 100lts- upto 2500ltrs with jacket or limped coil with various types of impellers. Limpet - SS 304 / MS : Used for heating and/ or for cooling/ chilling.Inside Coiled - SS 316 / 304 : Used for heating and/or for cooling/ chilling. These reactors are engineered in accordance with the international quality standards. We used superior-grade raw material for manufacturing the offered products. 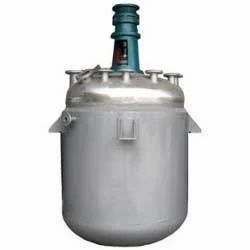 A jacket is a cavity external to the vessel that permits the uniform exchange of heat between the fluid circulating in it and the walls of the vessel. There are several types of jackets, depending on the design 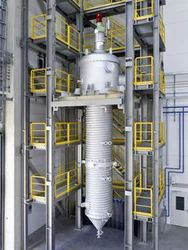 We are voluntarily engaged in the field of providing Thin Film Evaporators.

After entering the Thin Film Evaporator, the product comes into contact with the rotor: it is uniformly spread on the periphery by the distribution ring, then picked up by the first rotor blades and immediately formed in to a film (0.5 - 3.5 mm) on the heat transfer surface. In front of each rotor blade, the fluid creates a bow wave.

The fluid in the gap between the heat transfer surface and the rotor blade tip is highly turbulent and this leads to intensive heat and mass transfer rates.

Due to the intensive mixing action within the bow wave, temperature sensitive products are prevented from over heating and fouling on the heat transfer surface can be reduced or eliminated.

The volatile components of the feed stock are therefore very quickly evaporated and flow counter-currently with reference to the feed, up towards the top of the evaporator to the rotating separator. Here, entrained droplets or foam are knocked out of the vapour steam and return to the evaporation zone. The evaporated components (low boilers) then flow out of the evaporator in to the condensation stage, column or to another downstream process step. For special applications co-current vapour/product flow can be used in which case a separation vessel is fitted at the bottom of the evaporator below the rotor in place of the normal rotor mounted separator and the upper vapour outlet nozzle. 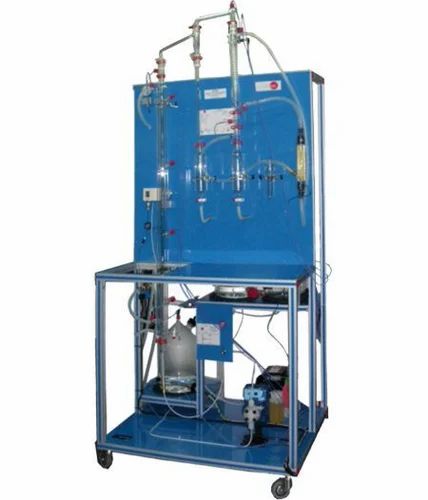 In order to meet the varying demands of our customers, we are involved in providing Rising Film Evaporator.

A rising film or vertical long tube evaporator is a type of evaporator that is essentially a vertical shell and tube heat exchanger.These operate on a "thermo-siphon" principle. Feed enters the bottom of the heating tubes and as it heats, steam begins to form. The ascending force of this steam produced during the boiling causes liquid and vapors to flow upwards in parallel flow. At the same time the production of vapor increases and the product is pressed as a thin film on the walls of the tubes, and the liquid rises upwards.

This co-current upward movement has the beneficial effect of creating a high degree of turbulence in the liquid. This is advantageous during evaporation of highly viscous products and products that have a tendency to foul the heating surfaces. Usually there must be a rather high temperature difference between the heating and boiling sides of this type of evaporator. Otherwise the energy of the vapor flow is not sufficient to convey the liquid and to produce the rising film. The length of the boiling tubes will typically not exceed 23 ft. This type of evaporator is often used with product recirculation, where some of the formed concentrate is reintroduced back to the feed inlet in order to produce sufficient liquid loading inside the boiling tubes. 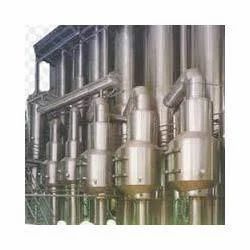 We are also betrothed in offering to our clients, a consignment of Falling Film Evaporator.

A falling film evaporator is an industrial device to concentrate solutions, especially with heat sensitive components.

In falling film evaporators, liquid and vapors flow downwards in parallel flow. The liquid to be concentrated is preheated to boiling temperature. An even thin film enters the heating tubes via a distribution device in the head of the evaporator, flows downward at boiling temperature, and is partially evaporated. This gravity-induced downward movement is increasingly augmented by the co-current vapor flow.

Falling film evaporators can be operated with very low temperature differences between the heating media and the boiling liquid, and they also have very short product contact times, typically just a few seconds per pass. These characteristics make the falling film evaporator particularly suitable for heat-sensitive products, and it is today the most frequently used type of evaporator.

This type of evaporator is generally made of 4–8 m (13–26 ft) tubes enclosed by steam jackets. The uniform distribution of the solution is important when using this type of evaporator. The solution enters and gains velocity as it flows downward. This gain in velocity is attributed to the vapor being evolved against the heating medium, which flows downward as well. This evaporator is usually applied to highly viscous solutions, so it is frequently used in the chemical, food, and fermentation industries. 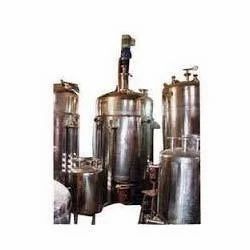 We are a top notch manufacturer, exporter and supplier of excellent quality GMP Reactor that is widely used in chemical and pharmaceutical industries. MOC - SA 240 Gr 316 & Gr 304 & Other Alloys.Manufactured Capacity - 25 KL ( 6600 Gallons )Heat transfer arrangements in Pressure VesselJacketed - SS 304 / MS : Used for heating -and / or for cooling. 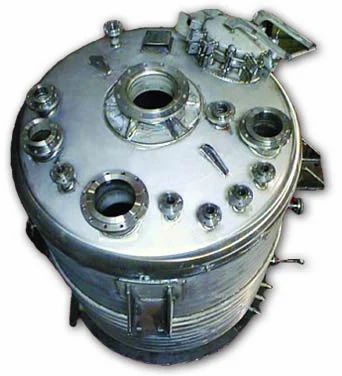