Our vision is to bring smiles among childless couple by making them proud parents and be recognized amongst the best fertility clinics in India. Our mission is to provide world class and compassionate medical care with our success proven and qualified medical team. We promise to provide the finest medical facilities to achieve a positive outcome.+ Read More

Psychology Of Ivf And Infertility Service

Psychology of IVF and Infertility

Infertility causes very significant levels of stress, anxiety and depression in couples. Men and women do not react to infertility in the same way at the same time or with similar level of commitment.
In many cases the infertile couple is surrounded by the fertility of their families, friends and co-workers. If most of the couples who surrounded them have achieved one or two pregnancies during this time then the infertile couple is likely to feel more and more dejected and left out.

Infertility treatment is expensive and entails plenty of visits to the clinic which can make it difficult for working couples with strict office hour schedules.

Most of the young couples seeking help for infertility are successful working professionals who would have achieved most of their major goals that they set for themselves in their lives. A majorities of the couples believe in a higher power and pray regularly. For many, this is the first time that God has not answered their prayers, leading many to question either their own level of goodness, or the existence of God. A well documented study done on women prior to beginning an IVF or ICSI cycle, clearly shows the co-relation between the baseline stress level in the women and various parameters pertaining to the IVF procedure like the number oocytes retrieved, percentage fertilized, pregnancy rates and live birth rate. The strength of the co-relation between distress and pregnancy was strong – the subjects who expressed the least baseline level of distress were 93% more likely to give birth than the patients who reported the most baseline of distress. The majority of research does prove that stress reduces the effectiveness of ART. The exact mechanism of action however is unknown.

The other important disadvantage of being very stressed and depressed is that the chance of the couple dropping out the IVF program after a single cycle failure is extremely high. This drops out very obviously limits a couple’s ability to get pregnant. One of the most effective ways to reduce on-going stress during IVF treatment is in the form of counseling by the IVF clinic staff. This counseling is best when it is personalized and includes plenty of attention and support. If has been found helpful for couples to include stress management strategies, life style modification and other relaxation techniques into their daily life during IVF treatment. It may help to have a support group comprising of other couples going through similar treatment and have regular group meeting with them.

What makes the stress less for different couples may vary. The doctor and couple can plan out different strategies that could ultimately work best in a particular couple. It is important to stay relaxed, calm and realistic. This is the most effective way by which a couple could achieve a pregnancy, go through the ups and downs of IVF cycles with equanimity and not stray from their objective of achieving parenthood through Art.

Various ovarian cycle management regimens that have either been used in the past or are still being used. Clomiphene citrate (CC) tablets are administered at a dose of 50-100mg once daily from days 2-6 of the menstrual cycle, i.e. for five days. This regimen may initially lead to the development of some follicles in the ovary but only one usually continues to grow and ovulation of one oocytes usually occurs. The addition of gonadotrophin injections in the latter half of the follicular phase may encourage more of the follicles to continue to develop with the eventual ovulation of more than one oocyte. It is felt that the availability of more than one oocytes for fertilization improves the chance of conception.

Some women may not respond to CC or are not suitable candidates for ovulation induction using CC. Such women are administered gonadotrophin injections from Day 2 of the menstrual cycle or on the second day of a withdrawal bleed following pre-treatment with progesterone preparations or combined oral contraceptive tablets. The dose of gonadotrophin injection is usually 75-150 IU administered daily or every other day. The last regimen involves the use of GnRHa, to prevent a premature surge of luteinizing hormone (LH) secretion by the pituitary gland.

Ultrasound scanning provides the most practical method for monitoring follicular development during IUI treatment. The follicle becomes visible using transvaginal ultrasound scanning by the time its diameter is between 2 and 3 mm. Its growth is usually linear and the diameter increases by 2-3 mm per day. Ovulation occurs when the follicular diameter reaches 18-24mm. Ultrasound scanning will also demonstrate progressive thickening of the endometrial layer, which ideally should be more than 9mm thick. Monitoring ovarian response to stimulation by serial oestradiol assays is not very useful during IUI treatment as the ultrasound provides adequate evidence of follicular growth.

An injection of 10000 IU of is administered once the diameter of the leading follicle reaches 18mm or more.

Many couples faced with infertility are still unable to become pregnant after first line therapy such as ovulation induction, intrauterine insemination, or reproductive surgery. For these couples, the logical next step is to explore the Assisted Reproductive Technologies (ART).

These treatments include In Vitro Fertilization and other assisted laboratory techniques designed to improve fertilization. Compared to simpler treatments, ART procedures typically have very high success rates but are more complex as they involve well-coordinated, perfectly timed effort between the medical team, laboratory staff and the patient.

Couples who are aware of all aspects of their treatment will be more co-operative since they know exactly what to expect and when. Most importantly they are fully informed on issues such as success rates of the treatment, complications and possible side-effects.

It is necessary to take certain medications during the IVF cycle in order to prepare the body for the treatment. The instructions for each medication vary from patient to patient.

GnRH Agonists – Lupride taken as an injection just below the skin and allows the body to produce a greater number of high quality eggs during the treatment cycle. They also prevent the midcycle hormonal surge that can result in the cancellation of a cycle.

Antagonists – Orgalutran and Cetrotide are antagonists of gonadotropin releasing hormone (GnRH) and are used to prevent premature ovulation. These medications are given by injection and the duration of treatment is usually three or four days.

is taken as an intramuscular injection and are used to induce the final maturational changes in the eggs and prepare them for retrieval. The most commonly prescribed  are Ovutrig , and Hucog.

Doxycycline – Doxycycline, an antibiotic administered in pill form, is given to the male partner during the wife’s stimulation cycle to reduce the low levels of bacteria that may be found in the semen and which may compromise the performance of the

during an IVF cycle. It is also given to the female partner to reduce the risk of infection following aspiration of the follicles at the time of egg retrieval.

Progesterone – Natural Progesterone may be taken as a daily intramuscular injection beginning two days after egg retrieval and continuing until the placenta is making adequate amounts of Progesterone. Progesterone can also be given in the form of a vaginalgel orvaginal suppositories or pills. 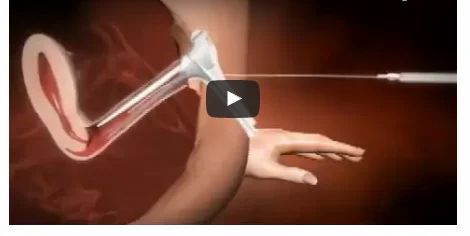 Intrauterine insemination (IUI) is a procedure in which are placed directly into the uterine cavity through a catheter near the time of ovulation. This procedure is most commonly performed when there are problems with the , such as low count or low motility, or an incompatibility between the

and the cervical mucus. It can also be performed to overcome problems associated with a man’s inability to inside the woman’s

due to impotence,  or other medical conditions. IUI increases the chances of pregnancy because the are placed directly in the uterus, bypassing the cervix and improving the delivery of the to the egg.

Usually the woman’s ovaries are also simultaneously stimulated to produce two to four oocytes. These manipulations have certain advantages over the natural situation. Firstly, many moresperm are spared from destruction in the and they are directly placed in the uterine cavity. Secondly, the distance whichsperm have to travel to reach the site of fertilization in the fallopian tube is greatly shortened. Thirdly, more oocytes are available in the fallopian tubes and this increases the chances of a at least one of them being fertilized. Finally, the presence of more than one embryo likewise improves the chances of one of them implanting successfully in the uterus. IUI is one of the simpler and less expensive assisted conception treatment methods. Its effectiveness is such that it is now regarded as a suitable first line assisted conception treatment for most infertile couples with patent fallopian tubes.IUI is timed to occur as close to ovulation as possible. Since the actual moment of ovulation is rarely known or witnessed, knowledge of the time-course relationship between the LH surge or administration of and ovulation is important. Not all follicles ovulate the same time; rather they do so in waves. These considerations have led some clinicians to carry out insemination twice, separated by 24 hours, around the time of ovulation. The first insemination is carried out 24 hours after administering is administered and the first insemination carried out immediately following detection of the surge. The immediate insemination is due to the uncertainly of the exact interval between the onset of the LH surge and its detection. In such instances the second insemination may be optionally carried out 24 hours after the first one.

The more accurate the monitoring methods used, the fewer the number of required inseminations since the time of ovulation will be known with greater certainty.

The volume of the preparedsperm sample should be restricted to 0.5ml. The woman lies in the lithotomy position (which approximates to lying on her back with the knees and hips flexed and thighs spread apart). A warm speculum is moistened with warm sterile water and gently inserted in the

to expose the cervix and cervical os. The cervix is gently wiped with several cotton wool balls soaked in normal saline solution. The insemination cannula is attached to the 1 ml syringe and used in drawing up thesperm suspension. The cannula is then gently introduced into the uterine cavity through the cervical canal and thesperm suspension gently expelled. All instruments are withdrawn and the patient allowed to lie on the procedure cough for some minutes before going home. A pregnancy test is carried out about two weeks later.

Life clinic is the best fertility clinic ivf centre in karnataka bangalore india. We are specialized in infertility treatments for men and women.