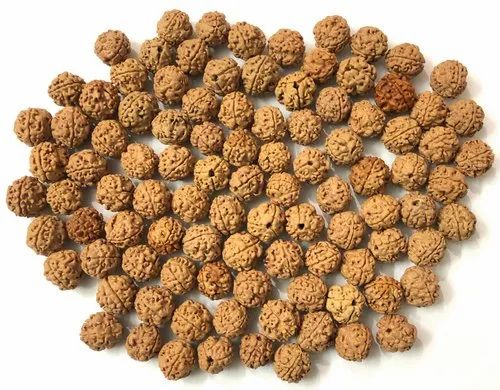 Mantra for Three mukhi Rudraksha are as follows -

The three faced rudraksha is considered of the form of fire. It symbolises the three attributes of the world - purity, merry-making, and ignorance. It is of the form of wish, knowledge, and activity and also symbolises the origin of the three worlds. Wearing it helps suppress destructive tendencies and enhace creative capability. It is governed by the Mars. It is helpful in eradicating the Mars related disorders, such as menstruation, abortion, blood, forehead, ear, testicles, bone marrow.

Established in 2003, Ruchi Enterprises is one of the leading Wholesaler Trader of Natural Nepali Rudraksha, Gems Stone These products are designed and manufactured in line with the latest standards of the industry at our vendor’s end. The entire range of products offered by us is very popular in the markets for their afford ability and high durability nature.

Rudraksha meaning—the eye of Rudra [Shiva] is considered to be the most potent manifestation of the Cosmic Force. Hence Rudraksha is the object of veneration and also the source to reach the higher self. Rudraksha is often believed to symbolize the link between the earth and the heaven. These beads are the seeds of the Rudraksha fruit obtained from Rudraksha trees. The Rudraksha tree is botanically known as ELAEOCARPUS GANITRUS ROXB. Its English name is UTRASUM BEAD TREE.

Rudraksha trees are mostly found in South Eastern Asian Islands of Java, Sumatra, Borneo, Bali, Iran, Java, Timor (Indonesia) and parts of South Asian Kingdom of Nepal. Around 70% of the Rudraksha trees are found in Indonesia, 25% in Nepal and 5% in India. Considered a major stress reliever, reducing circulatory problems and of course as the best beads, the berry (Elaeocarpus Ganitrus) was first spotted in Indonesia and is now grown in Nepal and Hardware. However, because it is expensive, clinical research of its medicinal properties has not been possible, often resulting in the berry being subjected to esoteric mumbo jumbo.

Get Directions
https://www.readymartindia.com
View Mobile No.
Call +91-8048010257
Send SMS
Send Email
Tell us what you
need
Receive seller
details
Seal the deal
Save time! Get Best Deal
I agree to the terms and privacy policy