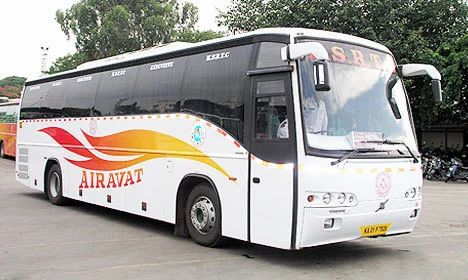 The salient features of Airavat are as follows:

In order to cater to the transport needs of the travelling public of the then state of Mysore, Mysore Government Road Transport Department(MGRTD) was inaugurated with 120 buses on 12th September 1948.

The State Transport, which was being administered as a Department of the Govt. of Mysore was subsequently converted into an independent Corporation under Section 3 of the Road Transport Corporation Act, 1950 on 1st of August 1961. The assets and liabilities of MGRTD excepting those of BTS unit as on 01-08-1961 were passed on to the new Corporation, which was named as MSRTC. The assets and liabilities of the residual MGRTD i.e. of BTS Unit were subsequently passed on to the Corporation on 1st of October 1961. Thus, Corporation was ultimately established for the entire State of Mysore

At the beginning, the passenger transport services were operated in 6 Divisions- 5 Divisions operating mofussil services and 1 Division operating city services of Bangalore. It had 37 Depots, 2 Regional Work Shops and a Central Office at Bangalore. There were 15 permanent and 30 temporary bus stations with 35 wayside shelters and 104 pick-up shelters. The total number of employees deployed was 9705 and the staff ratio per schedule was 9.43. The total number of routes operated was 1065 with 1029 schedules and route length of 32,134 miles, average daily scheduled mileage being 127571. The total number of inter-state routes operated by the Corporation on a reciprocal basis with the neighbouring States were 40 ie., 29 Maharastra, 1 Goa, 7 Andra Pradesh, 2 Tamilnadu and 1 Kerala. The total number of vehicles held was 1518 with average vehicle utilisation of 123.8 miles. The average number of passengers carried per day was 4.35 lakh. The rate of breakdown was 1.88 and that of accident was 1.19. Earning per Mile (EPM) realized was 161.6 Ps., and Cost per Mile (CPM) was 127.2 Ps., resulting in net profit margin of 34.4 Ps/mile.

Get Directions
www.indiamart.com/ksrtc-tours-travels-bengaluru
View Mobile No.
Call +91-7760990793
Send SMS
Send Email
Tell us what you
need
Receive seller
details
Seal the deal
Save time! Get Best Deal
I agree to the terms and privacy policy