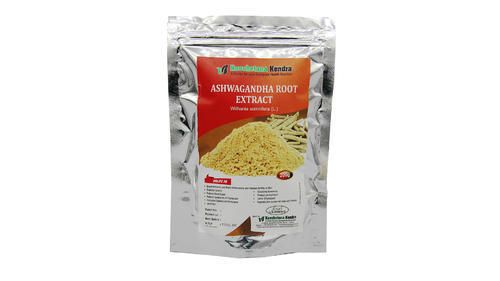 The name Ashwagandha is come from Sanskrit language,and meaning of Ashwa is 'horse' and gandha meaning is 'smell'.The root have aromatic that is described as “horse-like.” Ashwagandha roots have lot of uses in Ayurveda.Some people also use of ashwagandha in improving thinking and ability,capability and decreasing swelling pain etc.

Navchetana Kendra Health Care Private Limited, came into existence in 2013 working since 1996, engaged in manufacturing, exporting, wholesaling, trading and importing Patent Product & Natural Extract. Our offered range includes Patent Products, Natural Extract and Herbal Extract. These products are stamped with gilt-edged and most favorable qualities. Our major market in all over the world.
The entire range of our offerings is formulated by using hygienic ingredients and as per the best of global practices and quality control measures. We have incorporated a world-class infrastructure, where we process and formulate our products, which is supported by advanced and latest machinery. The team of committed and diligent experts is associated with us pertaining to the commencement of production tasks without flaw. In addition to our healthcare herbal products, we provide services significant in counseling alcohol de-addiction treatment. With our expert services in this domain, we have become a tried and trustworthy name for putting efforts into making society alcohol free. We have made our products with our expertise in blending and processing traditional herbs, for providing our customers the best of products and therapies.

Get Directions
https://www.herbalextractsmanufacturers.com
View Mobile No.
Call +91-8042973966
Send SMS
Send Email
Tell us what you
need
Receive seller
details
Seal the deal
Save time! Get Best Deal
I agree to the terms and privacy policy