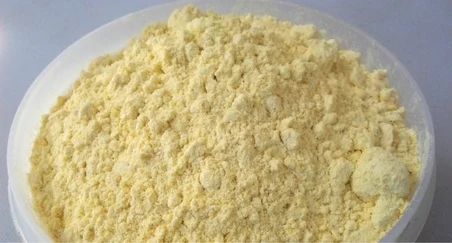 Gram flour, also known as garbanzo bean flour, or besan is a pulse flour made from ground chickpeasknown in a number of Asian countries as gram. It is a staple ingredient in Indian cuisines. Gram flour can be

Gram flour, also known as garbanzo bean flour, or besan is a pulse flour made from ground chickpeasknown in a number of Asian countries as gram. It is a staple ingredient in Indian cuisines. Gram flour can be made from either raw or roasted gram beans. The roasted variety is more flavorful, while the raw variety has a slightly bitter taste.In the form of a paste with water or yogurt, it is also popular as a facial exfoliant in the Indian Subcontinent. When mixed with an equal proportion of water, it can be used as an egg replacement in vegan cooking. Gram flour contains a high proportion of carbohydrates, no gluten, and a higher proportion of protein than other flours.

Incorporated in 1996 Kirti group of industries is one of india's imperative and domineering edible oil companies well known for its state-of-the-art in processing, refining and marketing of edible vegetable oils.Kirti group has grown exponentially since its inception and is an acknowledged Numero Uno in maharashtra as far as edible oil industry is concerned and ranks amongst the top three in india as far as solvent extraction and allied processes are concerned.Kirti group is engaged in oil milling field since last forty years and in solvent extraction and refining since last twenty years.the group has manufacturing units in latur, nanded, solapur, hingoli in maharashtra and bijapur in karnataka. Since all the plants are located in the vicinity of oilseed growing belt, the group enjoys geographical advantage by subtle access to the procurement of raw material in four states .the group is also actively engaged in international oil market in argentina ukraine malaysia tanazania and indonesia and some other economies through its star rated export house. Flourishing in consumer market the group has set benchmark in the edible oil industry in maharashtra, karnataka, chattisgarh and andhra pradesh.Despite its late entry in the consumer market the group stands tall with its competitors ,majority of which being the multinational companies.one of the major reason being the quality of products and the detailed study of the consumer tastes and preference.All the consumer products are ISO 9001:2008, 22000:2005 and Agmark certified. Kirtigroup is amongst the very few industries manufacturing high protein soymeal or de-oiled cake which is mainly consumed in poultry and aqua industries.Due to its demand in international market soyameal is also exported to vietnam,indonesia,myanmar,thailand,cambodia,japan,bangladesh.Kirti group has also diversified it's segment line to pulses milling units, packaged water bottling units and also soya value added products such as soy chunks,soy flour and soya lecithin.

Get Directions
https://www.indiamart.com/kirti-agrovet-ltd
View Mobile No.
Call +91-9158099999
Send SMS
Send Email
Tell us what you
need
Receive seller
details
Seal the deal
Pay with IndiaMART
Save time! Get Best Deal
I agree to the terms and privacy policy