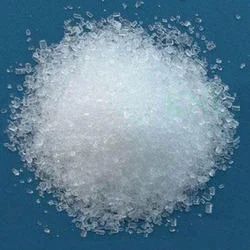 Calcium nitrate, also called Norgessalpeter (Norwegian saltpeter), is an inorganic compound with the formula Ca(NO3)2. This colourless salt absorbs moisture from the air and is commonly found as a tetrahydrate.

Calcium nitrate, also called Norgessalpeter (Norwegian saltpeter), is an inorganic compound with the formula Ca(NO3)2. This colourless salt absorbs moisture from the air and is commonly found as a tetrahydrate. It is mainly used as a component in fertilizers but has other applications. Nitrocalcite is the name for a mineral which is a hydrated calcium nitrate that forms as an efflorescence where manure contacts concrete or limestone in a dry environment as in stables or caverns. A variety of related salts are known including calcium ammonium nitrate decahydrate and calcium potassium nitrate decahydrate.[2]

Calcium nitrate is used in waste water pre-conditioning for odour emission prevention. The waste water pre-conditioning is based on establishing an anoxic biology in the waste water system. In the presence of nitrate, the metabolism for sulfates stops, thus preventing formation of hydrogen sulphide.[4] Additionally easy degradable organic matter is consumed, which otherwise can cause anaerobic conditions downstream as well as odour emissions itself. The concept is also applicable for surplus sludge treatment.[5]

Calcium nitrate is used in set accelerating concrete admixtures. This use with concrete and mortar is based on two effects. The calcium ion accelerates formation of calcium hydroxide and thus precipitation and setting. This effect is used also in cold weather concreting agents as well as some combined plasticizers.[6] The nitrate ion leads to formation of iron hydroxide, whose protective layer reduces corrosion of the concrete reinforcement.[7]

Year of Establishment1988
Legal Status of FirmIndividual - Proprietor
Nature of BusinessWholesaler
Number of Employees26 to 50 People
Annual TurnoverRs. 50 - 100 Crore
IndiaMART Member SinceMar 2018
GST27ABPPT2565H1Z3
Import Export Code (IEC)03890*****
MAN Industries offeres a wide array of products to the local as well as international markets.We offer various products like Chemicals-Commodity and Speciality,Insulation, Agicultural food items and other commodity items.Our Products are manufactured with high level of precision by taking high quality basic material in line with the set industry standards. Offered chemicals are widely known for their features like excellent performance and perfect composition. To cater the clients varied requirements, we are providing these products in different packaging options. We are exporting our quality products in North and South America, Europe, Middle Est Asia, South East Asia and African continents.
We have developed a modern infrastructure to manufacture the offered products as per the industry laid standards and norms. Our infrastructure unit is segmented into different units such as production unit, quality control unit, warehousing and packaging unit. All these units are operated by the highly experienced and well qualified team members. These team members have deep knowledge of this industry. Apart from this, we priced nominally to the provided products, so that one can avail these at budget friendly prices. To cater the clients varied requirements timely; we have developed a wide distribution network in the market. We are providing these products in different packaging options also so that our clients can purchase these products as per their required quantity.
Under the able guidance and mentorship of the Mr. Aman Tekriwal, we have developed a strong foothold in the industry. Attributing to his vast experience, we have accomplished to gain goodwill in the market. His leadership qualities have further enabled us touching the new dimensions of success. In addition to this, we have are committed to following fair business practices that help us gain the trust of our valued patrons.
We have attained such a noticeable place in the market. We are able to build a huge client base just because of his customer centric business approach and transparent deals. We are growing our reputation in the market due to his mentorship.
Send your enquiry to this supplier
I agree to the terms and privacy policy

Get Directions
https://www.indiamart.com/manindustries-mumbai
View Mobile No.
Call +91-7506215175
Send SMS
Send Email
Tell us what you
need
Receive seller
details
Seal the deal
Pay with IndiaMART
Save time! Get Best Deal
I agree to the terms and privacy policy