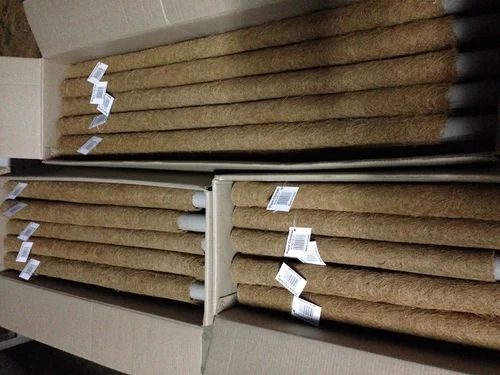 Help grow coco poles can be used in any type of clay or plastic pots, in plant nurseries or horticulture farms or simply in domestic / households as well.

Year of Establishment2012
Legal Status of FirmSole Proprietorship (Individual)
Nature of BusinessManufacturer
Number of EmployeesUpto 10 People
Annual TurnoverUpto Rs. 50 Lakh
IndiaMART Member SinceJun 2013
GST33CMCPS3309G1Z9
Import Export Code (IEC)3213002372
Coconut Woods was established in the year 2012. We are Manufacturer of Coir Pot, Coco Peat, Coir Felt, etc. Coir is the fibrous material found between the hard, internal shell and the outer coat of a coconut. The individual fibre cells are narrow and hollow, with thick walls made of cellulose. The two varieties of coir are brown and white. Brown coir harvested from fully ripened coconuts is thick, strong and has high abrasion resistance. Mature brown coir fibres contain more lignin and less cellulose than fibres such as flax and cotton, so are stronger but less flexible. White coir fibres harvested from coconuts before they are ripe are white or light brown in colour and are smoother and finer, but also weaker.
The coir fibre is relatively waterproof, and is one of the few natural fibres resistant to damage by saltwater. Fresh water is used to process brown coir, while seawater and fresh water is used to process brown coir, while seawater and fresh water are both used in the production of white coir.

Get Directions
https://www.indiamart.com/coconutwoods
View Mobile No.
Call +91-8046063655
Send SMS
Send Email
Tell us what you
need
Receive seller
details
Seal the deal
Pay with IndiaMART
Save time! Get Best Deal
I agree to the terms and privacy policy