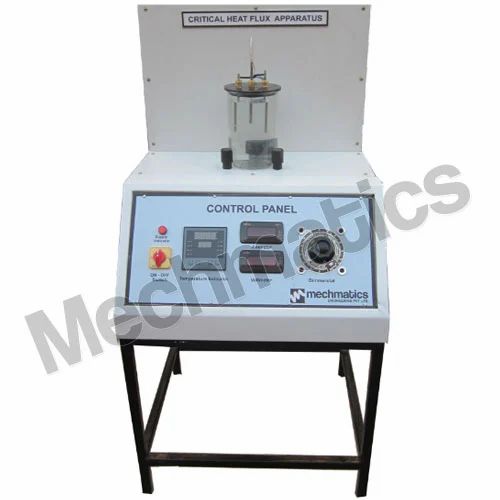 Critical heat flux describes the thermal limit of a phenomenon where a phase change occurs during heating which suddenly decreases the efficiency of heat transfer. The understanding of CHF phenomenon is important for safe and economic design of many heat transfer units including nuclear reactors, fossil fuel boilers, fusion reactors, electronic chips, etc.

The experiment is designed to illustrate the characteristics of the boiling phase change phenomenon. It involves observing the rate of boiling of a saturated liquid on the surface of a submerged hot wire object and measuring the variation of the object temperature with time.

The objective of this experiment is to observe the regimes of nucleate, transition, and film boiling in a pool of saturated liquid, to determine the rate of boiling, and to construct the boiling curve.

Year of Establishment2012
Legal Status of FirmLimited Company (Ltd./Pvt.Ltd.)
Nature of BusinessManufacturer
Number of Employees11 to 25 People
IndiaMART Member SinceApr 2010
GST24AAICM0129M1ZH
Import Export Code (IEC)0813003377
We at Mechmatics believe that good education helps to transform the world into a better place to live. Knowledge is cultivated when tools used in the learning process are of finest quality, clears the fundamentals and initiates further thinking. Albert Einstein once said, "The Only source of knowledge is Experience". Our products are designed to impart this experimental knowledge.

Get Directions
https://www.mechmaticsengg.com
View Mobile No.
Call +91-8048602288
Send SMS
Send Email
Tell us what you
need
Receive seller
details
Seal the deal
Pay with IndiaMART
Save time! Get Best Deal
I agree to the terms and privacy policy