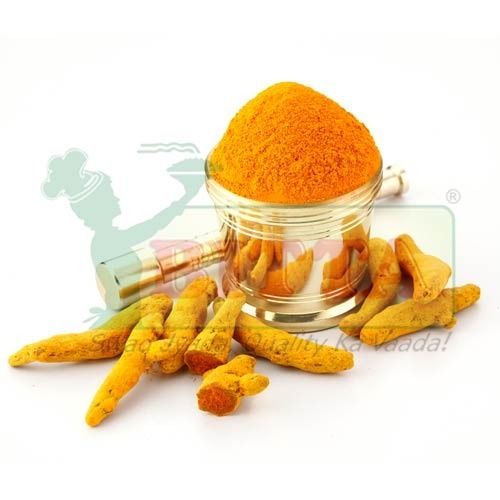 Curcuma, Saffron Des Indes Kurkuma Gelbwurzel, Gurkmeja, Fanwin, Kurkum, Geelwortel, Kaha, Curcuma Turmeric (Curcuma longa) is a rhizomatous herbaceous perennial plant of the ginger family, Zingiberaceae. It is native to tropical South Asia and needs temperatures between 20 °C and 30 °C (68 °F and 86 °F) and a considerable amount of annual rainfall to thrive. Plants are gathered annually for their rhizomes, and propagated from some of those rhizomes in the following season.

When not used fresh, the rhizomes are boiled for several hours and then dried in hot ovens, after which they are ground into a deep orange-yellow powder commonly used as a spice in curries and other South Asian and Middle Eastern cuisine, for dyeing, and to impart color to mustard condiments. Its active ingredient is curcumin and it has a distinctly earthy, slightly bitter, slightly hot peppery flavor and a mustardy smell. Curcumin can be used to test the alkalinity or acidity of foods. It turns yellow in an acidic food, and it turns red in an alkaline food.

In medieval Europe, turmeric became known as Indian saffron, since it was widely used as an alternative to the far more expensive saffron spice.

Turmeric is commonly called Pasupu in Telugu, Kaha in Sinhala, Manjal in Tamil literally meaning yellow color, Arisina in Kannada, Haridra in Sanskrit, Haldi in Urdu and Haldar or Haldi in Hindi, Haladi in Oriya, Halud in Bengali Besar in Nepalese. Attempts to patent turmeric have been defeated.

Established in the year 1983, we, 'D. K. Brothers', are a reputed manufacturer, supplier and exporter of a quality approved gamut of Ground and Indian Spices.The range offered by us encompasses Red Chilli Powder, Chicken Masala, Jeera Powder, Pickle Masala, Sambhar Masala,Kashmiri Chilli Powder, Grounded Spices, Red Chilli Powder, Jeera Powder, Kashmiri Chilli Powder, Black Pepper Powder, Garam Masala Powder, Turmeric Powder, Curry Powder, Coriander Powder, Dhania Jeera Powder, Geelwortel, Kaha, Curcuma etc. In addition to this, our valuable customers can avail Chai Masala, Panipuri Masala, Sabji Masala, Malvani Masala, Mixed Masala and Black Salt from us at industry leading prices. All our products are processed by the food experts under hygienic conditions, making use of spice mixing, grinding and drying machines. The offered spices are widely used to add flavor and delicious taste in various food items. Customers can avail these spices from us in air-tight packaging, so as to retain their exotic aroma and supreme quality. Owing to the features like exotic aroma, unadulterated, hygienic and purity, these spices are widely used in the kitchen of hotels, restaurants, canteens and residences. Moreover, for retaining the hygienic value of our spices, we offer these products to the clients in different quantity packs.