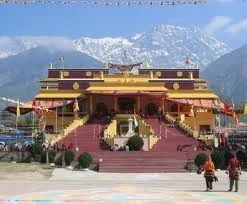 Get Latest Price
This is a hill station lying on the spur of the Dhauladhar range about 17 kms north- east of Kangra town. This hill station is wooded with oak and conifer trees and snow capped mountains enfold three sides of the town while the valley stretches in front. The snowline is perhaps more easily accessible at Dharamshala than at any other hill resort and it is possible to make a day's trek to a snow-point after an early
View Complete Details
Contact SellerAsk for best deal
Get Latest PriceRequest a quote

This is a hill station lying on the spur of the Dhauladhar range about 17 kms north- east of Kangra town. This hill station is wooded with oak and conifer trees and snow capped mountains enfold three sides of the town while the valley stretches in front. The snowline is perhaps more easily accessible at Dharamshala than at any other hill resort and it is possible to make a day's trek to a snow-point after an early morning's start. Dharamshala is also the head quarter of the Kangra district.Dharamsala is known for its scenic beauty, calmness and serenity. It has high pine trees, tea gardens and timber yielding trees. In winter, the temperature can drop to freezing point when heavy woolens are required. During summer, the climate is mild and light woolens / cottons are recommended.The city is divided into two distinct sections. Kotwali Bazaar and the surrounding markets are referred to as "LowerDharamshala" or just "Dharamshala." Further up the mountain is McLeodGanj separated in between by the village of Ganchen Kyishong, the home of the Tibetan government-in-exile. A steep, narrow road connects McLeodGanj from Dharamshala and is only accessible to taxis and small cars, while a longer road winds around the valley for use by buses and trucks. McLeodGanj is surrounded by pine, Himalayan oak, and rhododendron.Dharamsala can be approached by air from Delhi. The nearest airport is at Gaggal, 13 km away. Pathankot, the nearest broad gauge railway station is 85 km away and the toy train station is 17 km at Kangra. Taxis and Buses for Dharamsala are available at both places. From Pathankot the drive takes about three hours or you can drive from Delhi (526 km) via Chandigarh, Kiratpur and Bilaspur and takes 12 hours.

PLACES OF INTERESTThe variety Dharamsala offers for sightseeing ranges from temples, churches and monasteries to museums, ancient towns and places of natural beauty. Every season and every spot has its own special offering.KANGRA ART MUSEUM, KOTWALI BAZAR : This treasure trove of the Kangra Valley displays arts, crafts and rich past, artifacts that date back to the 5th century. It includes a gallery of Kangra's famous miniature painting and a representative collection of sculptures, pottery and anthropological items. Shamianas and dresses used by local royalty, old carved doors, jails, lintels and pandals are also on display Coins, jewelry and manuscripts are included. A section houses the work of contemporary artists, sculptures and photographers.

WAR MEMORIAL : At their start of town, landscaped lawns and a web of narrow paths fill a pine grove where a monument has been raised to commemorate the post independence war heroes of Himachal Pradesh.
KUNAL PATHRI : A 3 km level walk from the Kotwali Bazaar leads up to this rock temple.
ST. JOHN'S CHURCH : 8 km from Dharamsala, between Forsythganj and Mcleodganj is the charming church of St. John in the Wilderness. Under the shade of deodar branches, a memorial has been erected over the body of the British Viceroy, Lord Elgin who died at Dharamsala in 1863. There is a well tended old graveyard on these grassy sloped.
FISHING : The 20 km stretch of the river Beas between Nadaun and Pong Dam offers ample opportunities in angling for Mahaseer.

Nature of BusinessTravel / Travel Agents / Transportation Services
IndiaMART Member SinceJan 2014
“India Travels Online” is one of the Growing and Reputed travel company in INDIA. Our mission is Bring fun to your holidays and provide you Unforgettable tours. India Travels Online offers world-class, hassle-free holidaying in India. We take care of all your travel needs, thereby giving you the bliss of enjoying travel at any given point. We value our customers and realize that each customer is unique.
We create holidays keeping in mind your convenience, preferences, interests and time constraints. A workforce of professionally skilled persons, have added laurels to our business. If You are seeking a travel company who can not only provide top quality service, but can also anticipate and fully understand your needs, then look no furtherCompany’s core activities are All kind of Tour services, Car Hire, Hotel Reservations, Affordable tour packages, Domestic Tour like: Shimla Manali tours, Exotic Kerala tours, Special Kashmir tour and Royal Rajasthan tours .
Send your enquiry to this supplier
I agree to the terms and privacy policy