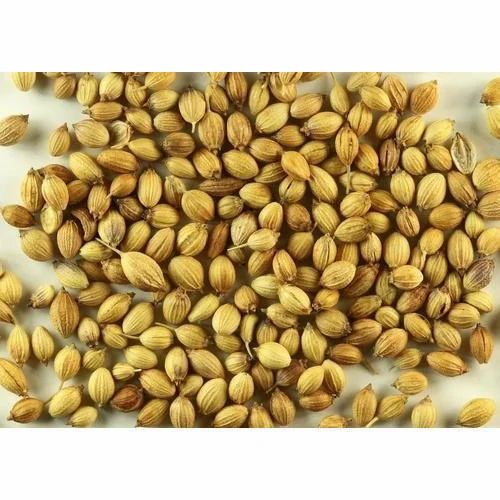 (/??k??ri??ænd??r, ??k??riænd??r/; Coriandrum sativum) is an annual herb in the family Apiaceae. It is also known as Chinese parsley, and the stems and leaves are usually called cilantro (/s????læntro??, -??l????n-/) in North America. All parts of the plant are edible, but the fresh leaves and the dried seeds (as a spice) are the parts most traditionally used in cooking.

Most people perceive the taste of coriander leaves as a tart, lemon/lime taste, but a smaller group of about 3–21% of people tested think the leaves taste like dish soap, linked to a gene which detects some specific aldehydes that are also used as odorant substances in many soaps and detergents.

The dry fruits are known as coriander seeds. The word "coriander" in food preparation may refer solely to these seeds (as a spice), rather than to the plant. The seeds have a lemony citrus flavour when crushed, due to terpenes linalool and pinene. It is described as warm, nutty, spicy, and orange-flavoured.

The variety C. s. vulgare has a fruit diameter of 3–5 mm (0.12–0.20 in), while var. C. s. microcarpum fruits have a diameter of 1.5–3 mm (0.06–0.12 in). Large-fruited types are grown mainly by tropical and subtropical countries, e.g. Morocco, India, and Australia, and contain a low volatile oil content (0.1-0.4%). They are used extensively for grinding and blending purposes in the spice trade. Types with smaller fruit are produced in temperate regions and usually have a volatile oil content around 0.4-1.8%, so are highly valued as a raw material for the preparation of essential oil.

Coriander is commonly found both as whole dried seeds and in ground form. Roasting or heating the seeds in a dry pan heightens the flavour, aroma, and pungency. Ground coriander seed loses flavour quickly in storage and is best ground fresh. Coriander seed is a spice in garam masala and Indian curries which often employ the ground fruits in generous amounts together with cumin, acting as a thickener in a mixture called dhana jeera.[19] Roasted coriander seeds, called dhana dal, are eaten as a snack. They are the main ingredient of the two south Indian dishes sambhar and rasam.

Outside of Asia, coriander seed is used widely in the process for pickling vegetables. In Germany and South Africa (see boerewors), the seeds are used while making sausages. In Russia and Central Europe, coriander seed is an occasional ingredient in rye bread (e.g. Borodinsky bread), as an alternative to caraway. The Zuni people of North America have adapted it into their cuisine, mixing the powdered seeds ground with chili and using it as a condiment with meat, and eating leaves as a salad.[20]

Coriander is listed as one of the original ingredients in the secret formula for Coca-Cola.

Incepted in the year of 1999, Jaipal Dinesh Kumar Aggarwal has been engaged in the wholesale and trade of products like Anjir Figs, Almond Nuts, Berberis Aristata Powder, Ajinomoto Powder, Fresh Green Coriander, Bhringraj Powder, Dry Shikakai, etc. Moreover, we are engaged in offering with a capable series of these items as per the cherished and eminent demands of our patrons whom we have highly cherished.

Get Directions
https://www.indiamart.com/jaipaldineshkumaraggarwal
View Mobile No.
Call +91-8048718415
Send SMS
Send Email
Tell us what you
need
Receive seller
details
Seal the deal
Pay with IndiaMART
Save time! Get Best Deal
I agree to the terms and privacy policy