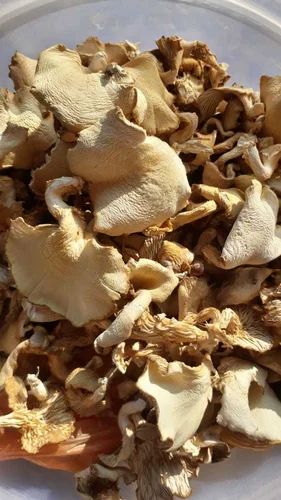 Oyster mushrooms are large, oyster-shell shaped edible fungi species. Their chewy, flavorful, fruiting bodies are widely popular in the Chinese, Japanese and Korean cuisine. It is native to the dense forests of North America, Northern Europe, and Siberian Asia.

Botanically, they belong to the family: Pleurotaceae, and the genus: Pleurotus.

Apart from the common oyster, some of highly valued, edible Pleurotus species that grown for their delicate fruiting bodies are:

Oyster mushrooms can be easily identified by their grey-white, oyster-shell shaped cap which is attached to thick, firm stalk (stem). Their undersurface is featured by highly defined gills which run right from the edge of cap up to the middle of the stalk. Cap measures about 5-15 cm in diameter. The stem has 2-4 inches in length.

Year of Establishment2017
Legal Status of FirmIndividual - Proprietor
Nature of BusinessManufacturer
Number of EmployeesUpto 10 People
IndiaMART Member SinceJan 2016
Established in 2017 at Nagpur, Maharashtra, we "Awes International” are a Sole Proprietorship (Individual) based firm, engaged as the foremost Manufacturer of Disposable Plastic Glass, Thermocol Glass and Silver Paper Plate. These products are offered by us most affordable rates. Our products are high in demand due to their premium quality, seamless finish, different patterns and affordable prices. Furthermore, we ensure to timely deliver these products to our clients, through this we have gained a huge client base in the market.

Get Directions
https://www.indiamart.com/awesinternational
View Mobile No.
Call +91-8048721114
Send SMS
Send Email
Tell us what you
need
Receive seller
details
Seal the deal
Save time! Get Best Deal
I agree to the terms and privacy policy