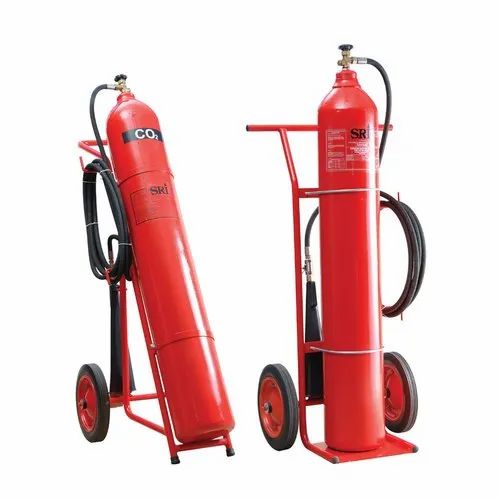 A fire extinguisher is an active fire protection device used to extinguish or control small fires, often in emergency situations. It is not intended for use on an out-of-control fire, such as one which has reached the ceiling, endangers the user (i.e., no escape route, smoke, explosion hazard, etc.), or otherwise requires the expertise of a fire brigade. Typically, a fire extinguisher consists of a hand-held cylindrical pressure vessel containing an agent which can be discharged to extinguish a fire. Fire extinguishers manufactured with non-cylindrical pressure vessels also exist but are less common.

There are two main types of fire extinguishers: stored-pressure and cartridge-operated. In stored pressure units, the expellant is stored in the same chamber as the firefighting agent itself. Depending on the agent used, different propellants are used. With dry chemical extinguishers, nitrogen is typically used; water and foam extinguishers typically use air. Stored pressure fire extinguishers are the most common type. Cartridge-operated extinguishers contain the expellant gas in a separate cartridge that is punctured prior to discharge, exposing the propellant to the extinguishing agent. This type is not as common, used primarily in areas such as industrial facilities, where they receive higher-than-average use. They have the advantage of simple and prompt recharge, allowing an operator to discharge the extinguisher, recharge it, and return to the fire in a reasonable amount of time. Unlike stored pressure types, these extinguishers use compressed carbon dioxide instead of nitrogen, although nitrogen cartridges are used on low temperature (-60 rated) models. Cartridge operated extinguishers are available in dry chemical and dry powder types in the U.S. and in water, wetting agent, foam, dry chemical (classes ABC and B.C.), and dry powder (class D) types in the rest of the world.

Year of Establishment2016
Legal Status of FirmIndividual - Proprietor
Nature of BusinessWholesale Trader
Number of Employees11 to 25 People
Annual TurnoverUpto Rs. 50 Lakh
IndiaMART Member SinceAug 2016
GST19ABSPH2927A1ZP
We, R.S. Enterprise from 2016 are an ISO Certified Company and famous amongst the esteemed wholesaler trader and service provider of an exceptional quality assortment of Fire Fighting Equipment. Offered products range consists of Fire Fighting Equipment, Fire Alarm, and Smoke Detector. The offered range is designed at our vendor’s end under the supervision of quality controllers. These products are known for their flawless finish, easy usability, lightweight, damage resistance and durability. Also, we are offering Fire License Services to our valued clients.


We believe in practicing business ethics in true spirit. We collaborate with our patrons and ensure their satisfaction at highest levels. The enthusiasm and exploring nature of our vendor’s team enable us to bring innovative designs in our products. Offered products are checked for versatility, durability, power efficiency and functionality before final delivery.