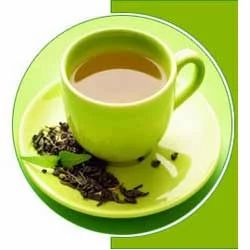 To evaluate the anti-caries effect of green tea, a group of 150 volunteers were randomly divided into 3 groups: A, B and C with 50 persons in each. People in test groups A and B were given a green tea polyphenol tablet whereas placebo was given to group C (tablets were taken three times daily). After 3 weeks, group A was given placebo and group B continued with polyphenols for 6 weeks. After using polyphenol tablets for 2 weeks, the plaque index of test groups were clearly lower than the control group (P < 0.01). After stopping use of the polyphenol tablet, the effect was still kept for 3 weeks. It can be concluded that polyphenol tablets from Chinese green tea have significant anti-plaque effect and can therefore help to prevent dental cavities.

Green and black tea leaves contain: methylxanthines - caffeine (theine), up to 4% with smaller amounts of theobromine and theophylline, as well as traces of adenine and xanthine; tannins. Polyphenols: tannins, mainly catechol tannins (10-20%); (-)-epicatechol, 4-gallocatechol, epigallocatechin gallate (EGCG) and other catechol gallates; flavan-3-ols and flavan-3.4-diols, as well as dimeric thea-flavins and oligomeric proanthocyanidins (thearubigenins); phenolic carboxylic acids such as gallic and chlorogenic acids, etc. Flavour substances: alcohols (hex-3-en-1-ol, benzyl alcohol, and 2-phenyl-ethanol, as well as linalool in black tea and geraniol in green tea.); essential oils (monoterpene aldehydes and alcohols); and theanine, the 5-ethylamide of glutamic acid. Other constituents: abundant flavonoids (including the apigenin derivatives isoschaftoside and vicenin-3); triterpenoid saponins; hydroperoxide lyases (anti-oxidant enzymes, and potent inhibitors of lipoxygenase). The accumulation of aluminum in tea leaves and the occasionally high content of fluorine compounds in older leaves are worth noting. Recent studies show that the residual green tea leaves remaining after tea is made are also rich in powerful antioxidants including (ranked according to suppressive activity against hydroperoxide generation): chlorophyll a > lutein > pheophytin a > chlorophyll b > beta-carotene > pheophytin b. [Wichtl and Bisset 1994; and Higashi-Okai K, Yamazaki M, Nagamori H, Okai Y. Identification and antioxidant activity of several pigments from the residual green tea (Camellia sinensis) after hot water extraction. J UOEH.

Year of Establishment2012
Legal Status of FirmPrivate Limited Company
Nature of BusinessManufacturer
Number of Employees11 to 25 People
Annual TurnoverRs. 5 - 10 Crore
IndiaMART Member SinceOct 2012
Established in the year 2012, at Ghaziabad we, “Quality Products Lab Private Limited” are a prominent manufacturer, supplier, importer, exporter & service provider of premium quality Plant Extracts and Food Ingredient. We also provide consultancy & contract manufacturing service to our clients.Our product range includes Effective Component, Essential Oil, Standard Extract, Oil Powder. Our products are globally appreciated for their good taste, high nutrition, effectiveness, longer shelf life. We have appointed a team of expert quality inspectors who make sure that superior food grade standards are maintained in our range.
The offered range is prepared using the finest quality ingredients and sophisticated technology. Offered products are highly appreciated among clients due to their natural flavor, optimum purity level, longer shelf life and hygiene. Owing to our processing procedures, our professionals also ensure that our products are in strict conformity with the international quality standards and high hygiene levels. These products are provided in varied packaging options as per the diverse requirements of clients. Apart from this, these can also be availed by clients from us at market leading prices. We exports our products majorly in East Europe, Indian Subcontinent, North Europe, South America, South/West Africa countries.

Get Directions
www.indiamart.com/quality-products-lab
View Mobile No.
Call +91-9868124165
Send SMS
Send Email
Tell us what you
need
Receive seller
details
Seal the deal
Save time! Get Best Deal
I agree to the terms and privacy policy