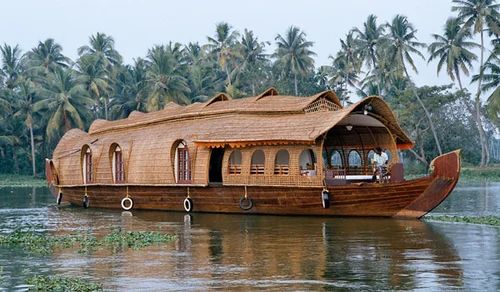 Get Latest Price
The Kerala backwaters are a chain of brackish lagoons and lakes lying parallel to the Arabian Seacoast (known as the Malabar Coast) of Kerala state in southern India. The network includes five large lakes linked by canals, both man made and natural, fed by 38 rivers, and extending virtually half the length of Kerala state. The backwaters were formed by the action of waves and shore currents creating low barrier islands
View Complete Details
Contact SellerAsk for best deal
Get Latest PriceRequest a quote

The Kerala backwaters are a chain of brackish lagoons and lakes lying parallel to the Arabian Seacoast (known as the Malabar Coast) of Kerala state in southern India. The network includes five large lakes linked by canals, both man made and natural, fed by 38 rivers, and extending virtually half the length of Kerala state. The backwaters were formed by the action of waves and shore currents creating low barrier islands across the mouths of the many rivers flowing down from the Western Ghats range.

The Kerala Backwaters are a network of interconnected canals, rivers, lakes and inlets, a labyrinthine system formed by more than 900 km of waterways, and sometimes compared to the American Bayou. In the midst of this landscape there are a number of towns and cities, which serve as the starting and end points of backwater cruises. National Waterway No. 3 from Kollam to Kottapuram, covers a distance of 205 km and runs almost parallel to the coast line of southern Kerala facilitating both cargo movement and backwater tourism.

The backwaters have a unique ecosystem - freshwater from the rivers meets the seawater from the Arabian Sea. In certain areas, such as the Vembanad Kayal, where a barrage has been built near Kumarakom, salt water from the sea is prevented from entering the deep inside, keeping the fresh water intact. Such fresh water is extensively used for irrigation purposes.

Many unique species of aquatic life including crabs, frogs and mudskippers, water birds such as terns,kingfishers, darters and cormorants, and animals such as otters and turtles live in and alongside the backwaters. Palm trees, pandanus shrubs, various leafy plants and bushes grow alongside the backwaters, providing a green hue to the surrounding landscape.

Vembanad Kayal is the largest of the lakes, covering an area of 200 km², and bordered by Alappuzha(Alleppey), Kottayam, and Ernakulam districts. The port of Kochi (Cochin) is located at the lake''s outlet to the Arabian Sea. Alleppey, "Venice of the East", has a large network of canals that meander through the town. Vembanad is India’s longest lake.

Kerala a state in Southern India is known as a tropical paradise of waving palms and wide sandy beaches. It is a narrow strip of coastal territory that slopes down the Western Ghats in a cascade of lush green vegetation, and reaches to the Arabian sea. Kerala borders the states of Tamil Nadu to the east andKarnataka to the north. It is also known for its backwaters, mountains, coconuts, spices and art forms like Kathakali and Mohini Attam. It is the most literate state in India, and a land of diverse religions, where you can find Hindu temples, mosques, churches, and even synagogues. With world class tourist sporting options, ayurvedic spas and treatments, eco-tourism initiatives, a large number of visit options ranging from beautiful high altitude blue mountains to pristine rain forests to golden sun-sand beaches and an enormous range of accommodation, Kerala has much to offer the visitor.

Bluesky Holidayworld - provides Tours and Travel opportunities of all kinds, to everyone on selective different locations. We, at Bluesky Holidayworld believe in presenting South India in a way that is quite unique, unexplored, and unhindered. We want to show you the possibilities that are immense and unending. In India you can explore the deserts, take chances and trek through the Hills, Relive history , explore heritage sites and pilgrimage places, bask under the glory of sun god and relax on the golden beaches, hunt the animals 'with cameras' and make wild friends in the forests, travel on the top of world's oldest working locomotive, or face the force of rapids and go for the boating on the back water.
Bluesky Holidays also offers outbound travel opportunities from India. Our clients' trips are absolutely hassle-free which help them to have a comfortable journey anywhere in the world.
Bluesky Holidays guarantees you a journey of a lifetime. Believe us when we say, Possibilities are Unlimited - You only need your imagination to find them and guts to live them. Our mission is to be the No.1 Global Travel organization with commitment to excellence and quality to our customers. We bring you a unique set of experience adding value to the traveler's overall experience of the country. To put it simply, we know what a traveler anticipates and more than that we know what it takes to satisfy them.

Get Directions
www.indiamart.com/bluesky-holidays
View Mobile No.
Call +91-8048783576
Send SMS
Send Email
Tell us what you
need
Receive seller
details
Seal the deal
Save time! Get Best Deal
I agree to the terms and privacy policy