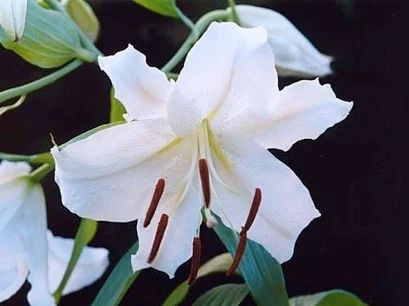 Get Latest Price
- The elegant Lilium, from the Liliaceae family is also grown and propagated here. A well drained location with enough sun is favourable for Lilium growth.
View Complete Details
Contact SellerAsk for best deal
Get Latest PriceRequest a quote

Blooming Fleurs’ lettuce won the 1st Prize at the First Vegetable Expo, held 17th - 19th Janury 2012 at The Centre for Excellence for Vegatables, Karnal, organised by the Haryana Horticulture Department. The prize speaks of the exceptional care we grow our produce in, resulting in exceptional quality for our consumers.

It is because of the same care of our products that the Rijk Zwaan, Netherlands has chosen Blooming Fleurs as a demonstration farm for its tomato and capsicum.

Blooming Fleurs was the privileged company to organize a comprehensive session on horticulture for about 40 farmers from all across Haryana. The visit, under the aegis of the Haryana Horticulture Department, was held on 12th October 2010. They received technical insight in the areas of Greenhouse production and its commercial viability. The farmers were made aware of the advantages of greenhouse cultivation and the profitability aspects of the same.
Blooming Fleurs has also been represented at the Haryana Horticulture Department, wherein lectures on topics of similar genres have been delivered. ‘Conference on Protected Cultivation of Vegetables and Flowers’ was one such symposium organized by the Department, where lectures were delivered.
The company has always established its distinctiveness in terms of quality and this has been further endorsed at the prestigious Mango Mela, held annually, at Yadvindra Gardens, Pinjore. Mangoes from Blooming Fleurs have received the third position in the Dussehri Mango category at the 18th and 19th Mango Mela, in the year 2009 and 2010 respectively.
Blooming Fleurs consistently aims at value addition. Mr. Lakhanpal’s visit to Holland in 2011, during which he enriched his understanding of global horticulture, was directed towards the same. From growth techniques in such countries with the advanced infrastructure, to finer quality of seeds and plants; all such facets were explored in detail at cities like Delft, Amsterdam and Waarland. Special samples of flowers and tomatoes were also obtained during the visit to study their feasibility in the Indian climate.
With such an advanced pace in the realm of horticulture/floriculture, Blooming Fleurs has much more in store and many diverse paths to tread upon, consequently, escalating its credibility and recognition.