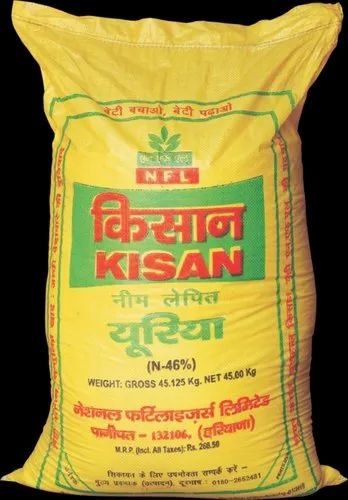 Agronomical trial on Paddy and Wheat crops with Neem coated Urea as source of Nitrogen has produced significantly higher yield at research and farm level. Looking into the potential of Neem Coated Urea and its acceptance by the farmers, Ministry of Agriculture in July 2004, included the Neem Coated Urea in FCO. The use of Neem Coated Urea has been found to improve the uptake of N, P and K significantly. Since 2008 the, Ministry of Chemicals and Fertilizers allowed Neem Coated Urea manufacturer to sell NCU at 5% above the MRP, to recover the cost of coating, however cost of Neem kernel Oil and production as such of Neem Coated Urea has increased significantly. As per recent notification dated 25.05.2015 all the urea producers in country shall now be producing 100% urea as NCC in order to improve crop productivity and reduce the subsidy. Balanced use Nitrogen, Phosphorous, Potassium along with the requirements of secondary and micronutrient increase the yield at economic level. Of the three major Nutrients Nitrogen, Phosphorous and Potash, nitrogen has received the maximum attention because of many reasons. Nitrogen gets easily converted to available forms from various types of fertilizers that are being applied for crop nutrition. Also nitrogen in Nitrate form is highly mobile and get lost through the process of leaching especially under irrigated conditions. Nitrogen is also lost in the process of de-nitrification where the nitrate form is back converted into Nitrogen and Ammonia and lost to atmosphere.

There are many references available on Nitrogen that indicates that the recovery of nitrogen under irrigated and submerged condition is hardly 35% due to various kind of loses it is subjected to such as de-nitrification, ammonia volatilization and leaching. In the world 50% of nitrogen is supplied through Urea and the scenarios in India are no different. In order to keep the nitrogen losses at minimum level, agricultural scientist have come out with various agronomical recommendations, to reduce these loses. The prevalent recommendations are split application, band placement, and deep placement using the see drill. All these practices make available the right quantities of requirement at the place of absorption. Application of bigger granules of urea retards the dissolution.

In addition to agronomical practices, various kind of nitrification inhibitors such as Nitrapyrin (N-Serve) and Terrazole (Dwett) were developed in USA. These Nitrification agents are very expensive and add to the already high cost of crop production in India.

Keeping in view the low Nitrogen use efficiency it has been felt to find out the use of some indigenous use of material and coating process for reducing the nitrogen losses from Urea. Use of Neem oil in various form such as Neem oil cake, Neem oil and other Neem product have been found useful in reducing the release from Urea and increase its use efficiency. Neem oil contains various kind of bitter, especially the Meliacins that have been identified in retarding the process of nitrification of Urea.

National Fertilizers Limited, in the year 2002, standardized the techniques for production of Neem Coated Urea in situ, at its Panipat Unit. Since then many changes have been made in the process and applicant solution, to have a uniform and consistent coating of Neem oil on urea prills, to maintain the concentration of Neem oil content as per the specification prescribed in FCO. Based upon the results of extensive field trial where Neem Coated urea was found to be agronomical superior to normal prilled urea, NFL became the first company in India that was granted the permission to produce and market the Neem Coated Urea, vide Govt of India Notification No S.O.807 (E) dated 9 July 2004 .

Year of Establishment1974
Legal Status of FirmLimited Company (Ltd./Pvt.Ltd.)
Nature of BusinessManufacturer
Number of EmployeesMore than 1000 People
Annual TurnoverMore than Rs. 500 Crore
IndiaMART Member SinceJul 2009
GST09AAACN0189N1Z2
Its Corporate Office is at NOIDA (U.P). It has an authorized capital of Rs. 1000 crore and a paid up capital of Rs. 490.58 crore out of which Government of India’s share is 74.71 % and 25.29 % is held by financial institutions & others.
Send your enquiry to this supplier
I agree to the terms and privacy policy

Get Directions
https://www.indiamart.com/national-fertilizers-limited
View Mobile No.
Call +91-9312077010
Send SMS
Send Email
Tell us what you
need
Receive seller
details
Seal the deal
Pay with IndiaMART
Save time! Get Best Deal
I agree to the terms and privacy policy