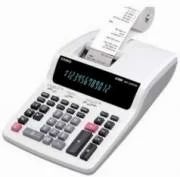 Key operations are stored in a buffer, so nothing is lost even during high-speed input.

Designed and engineered for easy operation.

Calculate the cost, selling price, or margin of profit on an item, given the other two values.

All the mark-up/mark-down capabilities of an adding machine for simplified cost and profit calculations.

The value indicates the number of lines printed per second.

electronic musical instrument is a musical instrument that produces its sounds using electronics. Such an instrument sounds by outputting an electrical audio signal that ultimately drives a loudspeaker.
An electronic instrument may include a user interface for controlling its sound, often by adjusting the pitch, frequency, or duration of each note. However, it is increasingly common for the user interface and sound-generating functions to be separated into a music controller (input device) and a music synthesizer, respectively, with the two devices communicating through a musical performance description language such as MIDI or Open Sound Control.
All electronic musical instruments can be viewed as a subset of audio signal processing applications. Simple electronic musical instruments are sometimes called sound effects; the border between sound effects and actual musical instruments is often hazy.
Calculator
An electronic calculator (usually called simply a calculator) is a small, usually inexpensive electronic device used to perform the basic operations of arithmetic. Modern calculators are more portable than most computers, though most PDAs are comparable in size to handheld calculators.
The first electronic calculator was created in the 1960s, building on the history of tools such as the abacus, developed around 2000 BC; and the mechanical calculator, developed in the 17th century. It was developed in parallel with the analog computers of the day. Pocket-sized devices become available in the 1970s, especially after the invention of the microprocessor developed serendipitously by Intel for a Busicom calculator. Modern calculators are electrically powered (usually by battery and/or solar cell) and vary from cheap, give-away, credit-card sized models to sturdy adding machine-like models with built-in printers.
They first became popular in the late 1960s as decreasing size and cost of electronics made possible devices for calculations, avoiding the use of scarce and expensive computer resources. By the 1980s, calculator prices had reduced to a point where a basic calculator was affordable to most. By the 1990s they had become common in math classes in schools, with the idea that students could be freed from basic calculations and focus on the concepts.

Get Directions
www.indiamart.com/electronic-enterprises
View Mobile No.
Call +91-8048755161
Send SMS
Send Email
Tell us what you
need
Receive seller
details
Seal the deal
Save time! Get Best Deal
I agree to the terms and privacy policy