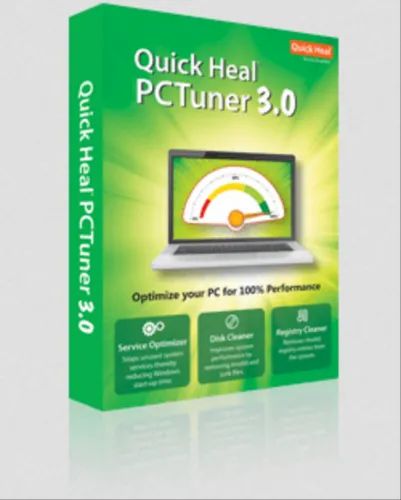 If you want to know how to speed up your PC, then look no further than Quick Heal PCTuner. Here''s what it does for your computer:
- Gets rid of junk files from your PC.
- Deletes traces of mostly used

If you want to know how to speed up your PC, then look no further than Quick Heal PCTuner. Here''s what it does for your computer:

Removes invalid registry entries from the system that appear due to improper uninstallation, non-existent fonts, etc.

By default, a backup is taken whenever Disk Cleanup or Registry Cleanup is performed. This helps the user to restore earlier settings in case any change in system behavior is observed.

Registry Defragmenter helps speed up your PC by clubbing all page-file fragments into one continuous chunk.

Boosts system performance by removing unwanted programs that run at startup and slow the system.

Deletes the user specified files and folders permanently from the hard disk making them unrecoverable even by any recovery software.

Windows may be running potentially unwanted services that consume memory and slow down system performance at startup. Service optimizer is an added feature that help speed up your PC, by disabling these unwanted services.

Legal Status of FirmLimited Company (Ltd./Pvt.Ltd.)
Nature of BusinessIT / Technology Services
IndiaMART Member SinceApr 2015
Seqrite is Quick Heal's Enterprise Security brand defined by innovation and simplicity. Our solutions are a combination of intelligence, analysis of applications and state-of-the-art technology, and are designed to provide better protection for our customers.
Send your enquiry to this supplier
I agree to the terms and privacy policy

Get Directions
www.indiamart.com/quick-heal-technologies-ltd-pune
View Mobile No.
Call +91-9373697067
Send SMS
Send Email
Tell us what you
need
Receive seller
details
Seal the deal
Save time! Get Best Deal
I agree to the terms and privacy policy