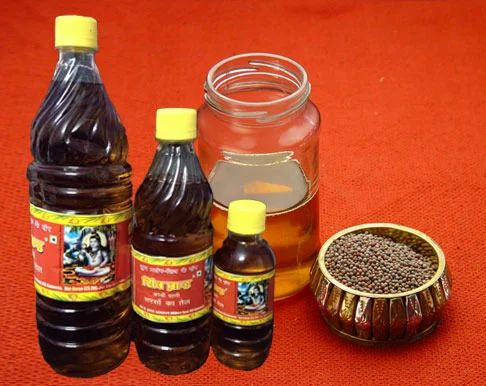 Get Latest Price
Shiv Group manufactures Mustard Pungent oil of its own. The oil contains no additives or preservatives and has low saturated fat content. It is also high in mono-unsaturated and omega-3 fats.
View Complete Details
Contact SellerAsk for best deal
Get Latest PriceRequest a quote

Shiv Group manufactures Mustard Pungent oil of its own. The oil contains no additives or preservatives and has low saturated fat content. It is also high in mono-unsaturated and omega-3 fats.

Year of Establishment1984
Nature of BusinessManufacturer
IndiaMART Member SinceMar 2013
With the aim of providing the best quality oil, Shiv Trading Company set its inception in the year 1984. Constant efforts and aim to produce the finest made Shiv Group of Industries the leading manufacturer of Soyabean Refined oil and Soya Meal in Rajasthan. With a dedicated staff of over 1200 people, we are proud to have three state-of-the-art production houses namely Shiv Agrevo Limited, Baran; Shiv Edibles Limited, Kota; Shiv Vegpro (P) Ltd., Kota.
Motivation makes you do great things. And, it was the dream of our four visionaries Shri Vishnu ji Saboo, Shri Sudershan ji Saboo, Shri Bajrang ji Saboo and Shri Satyaprakash ji Saboo to provide high quality soya bean edible oil and its foods. The foundation of the company was laid with the establishment of Oil Refinery where the Company had the capacity of processing just 15 MT of oil. And the current crushing capacity is over 1200 MT per day.
To uphold the glory it had achieved with its first project, another establishment took place in 1991, which was a Mustard Oil Mill named "Maheshwari Udyog" with a capacity of manufacturing 10 Tons oil. To full-fill its aim of providing the best edible oil to the consumers, Company set up its first Solvent Extraction Plant in the year 1996 "Shiv Agrevo Limited" with a humongous capacity of 100 MT per day. And today, this unit is the backbone of the group. Later in 1998, a Refinery was added and used to produce 30 MT of oil per day. After collecting accolades for being the best in state and on the way of rapid development, Shiv Edibles Limited was born in year 2004.
With a whooping capacity of crushing 500 MT of seed per day, youngest unit in the group "Shiv Vegpro (P) Limited" came into being in 2009. Shiv Vegpro is equipped with most advanced technology and is the most efficient plant in the region. In addition to all this, we have one of the best seed cleaning systems in India. We say this because, the seed goes through 10 sequential cleansing before to goes for extraction.
Shiv Group is famous for its unmatched quality when it comes to any of its products. This could happen only after continuous and highly thorough R&D program after years of hard work, Shiv group has acquired the strength of producing edible oil and soya meal of unmatched quality. Not just oil and normal meal, Shiv group is now producing many high value products like Hi-pro soya meal, Soya edible grits and Soyabean lecithin. The quality of these products is comparable to the best in the World.
Since the company's inception, we have been catering to the needs of the customers with perfection because of which we have successfully gained their faith in all our dealings. Over the past half decade, the group has changed more than ever before in its long and illustrious history. Rejuvenating existing plants, building new ones, manufacturing breakthrough products and expanding into various markets are among the initiatives the group has undertaken with vigour during this period. The pursuit of business excellence has become the norm and there is a focus on innovation. What has not changed is the Group’s emphasis on ethical business practices.
Apart from quality products, other factors such as superior procurement and trading skills, continuous innovation, an endeavour to meet consumer needs, passion to serve the society and stringent quality control standards have enabled Shiv group to emerge as a highly-respected and admired Indian company. Group of closely knit people in top management have guided the Shiv Group as it faced a host of challenges in a fast-changing business environment where old rules did not apply and new realities were taking place. Certainly, "Tough times don't last, tough people do!"
Milestones achieved
Send your enquiry to this supplier
I agree to the terms and privacy policy