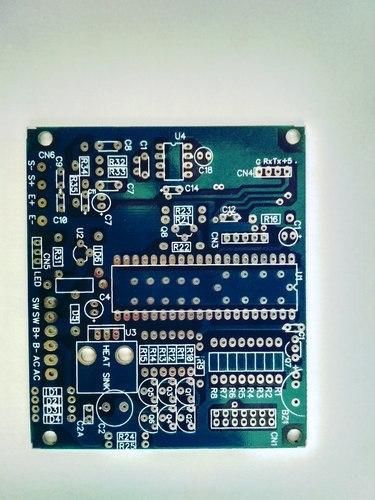 
AS the name stated single sided PCB have only one layer of conductive material. The single sided PCBs are introduced in 1950 and still famous than any other PCB. The Single side PCBs are easy to design and manufacturing is quite easy.

The single side PCB have one thin layer of thermally conductive and electrically insulating dielectric is laminated with copper. In the beginning, all the PCBs are made manually. But now it is first it is designed with software like ORCADS, EAGLES, PROTEL, and CAD. The process starts with design on a computer. Then print it on a simple page and after it ironed on a PCB sheet. After ironing the etching process is started. The upper layer is made with conductive material like copper and while etching with ferric chloride the copper is dissolved except printed layer. After etching the PCB is ready for inserting the components. For inserting components it required holes and it is made with the drill machine. But nowadays the latest technology PCB assembling machines are available. In this machines just insert PCB sheet and components and another process the machine do it by itself precisely.

Year of Establishment2015
Legal Status of FirmSole Proprietorship (Individual)
Nature of BusinessManufacturer
Number of Employees11 to 25 People
Annual TurnoverRs. 50 Lakh - 1 Crore
IndiaMART Member SinceJan 2014
GST24BHZPP2217B1ZD
We “Elenetic Electronics” are actively committed to manufacturing a remarkable array of Single Sided PCB, Printed Circuit Board, PCB Panel, PCB Board, etc. We are a Sole Proprietorship company that is incepted with an aim of providing an excellent quality range of products. Apart from this, we also impart highly reliable PCB Assembling Work and PCB Design And Cam Work. Founded in the year 2015 at Gandhinagar (Gujarat, India), we are providing a high-quality range of products as per the current market needs. Under the direction of our mentor “Mr. Jigar Patel”, we have reached the pinnacle of success.
Send your enquiry to this supplier
I agree to the terms and privacy policy

Get Directions
https://www.indiamart.com/india-circuit
View Mobile No.
Call +91-8042972746
Send SMS
Send Email
Tell us what you
need
Receive seller
details
Seal the deal
Pay with IndiaMART
Save time! Get Best Deal
I agree to the terms and privacy policy