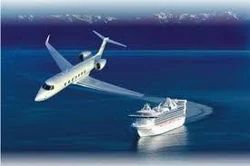 Kerala is known as "GODS OWN COUNTRY" for its breath-taking beauty and the city of Kochi lies on the South West Coast overlooking the Arabian sea. For centuries, Kochi has been a gathering place for merchants and tourists from various nations and people who have been here from Arabs to the Portuguese and British have all left their legacy and cultural imprints behind. Today Kochi has emerged as one of the "MUST DESTINATIONS PLACES TO VISIT IN KERALA" to visit and the cultural and historical significance of Kochi offers various tourist spots around Kochi.

Kochi, also known as Cochin, is a major port city on the west coast of India by the Arabian Sea and is part of the district of Ernakulam in the state of Kerala.

Kochi is the financial capital of Kerala and, with a population of more than 2 million, the biggest urban agglomeration in the state. It is one of the major tourist destinations in India.

Get Directions
www.indiamart.com/kochitourism
View Mobile No.
Call +91-9446573442
Send SMS
Send Email
Tell us what you
need
Receive seller
details
Seal the deal
Save time! Get Best Deal
I agree to the terms and privacy policy