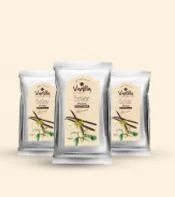 Get Latest Price
With sincere intentions to preserve and uplift our reputation in the market, we bring forth a distinguished assortment of Vanilla Seeds.
View Complete Details
Contact SellerAsk for best deal
Get Latest PriceRequest a quote

With sincere intentions to preserve and uplift our reputation in the market, we bring forth a distinguished assortment of Vanilla Seeds.

For more than a decade, Goodness Vanilla is a name synonymous with the finest of all Natural Vanilla in the world. Thanks to the considerate climate of the mystic mountains of Western Ghats and the devoted and hardworking planter community, Goodness Vanilla is today one of the most preferred ingredients in cross country cuisines.

The story begins around 1996, when the falling prices of rubber, coconut and coffee forced the desperate South Indian farmers to turn into a more profitable crop. Destiny chose Dr.Mahendran, an ardent farmer hailing from Pollachi to cultivate a foreign orchid, that no one in the land grew commercially successfully before. Cultivating Vanilla, the modest orchid that produces the world's second expensive spice after saffron, was the start of an earnest and honest effort, called Indian Vanilla Initiative. Under the insightful leadership of Dr.Mahendran, the Initiative saw Vanilla, which would be cultivated through intercropping and with a minimum investment, flourish in the salubrious environment of Western Ghats.

The Indian Vanilla Initiative and its leader now with more than two decades of experience, continue to motivate the otherwise scattered planters to produce Vanilla on a large-scale. Sooner, Indian Vanilla Enterprise was also introduced, which began marketing Vanilla products under the brand Goodness Vanilla.

Get Directions
https://www.indiamart.com/indian-vanilla
View Mobile No.
Call +91-9786699611
Send SMS
Send Email
Tell us what you
need
Receive seller
details
Seal the deal
Pay with IndiaMART
Save time! Get Best Deal
I agree to the terms and privacy policy