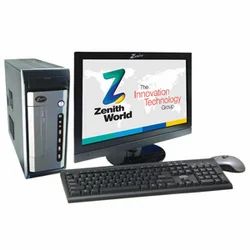 HOWEVER FAR WE’VE COME, WE CAN ALWAYS GO FURTHER.
Started in 1980, Zenith has strived to bring the latest technology products to the Indian market. Thereby, creating a market in India for computing in offices, banks, households, education and every sector that has benefitted from technological advancement. Yet, we refuse to take much credit for the fact that Zenith launched laptops in India for the first time, and introduced networking in India for the first time, and many others such as Unix, CPM, touchscreens and other innovations. Our success has been evidence enough.
When Zenith began, it was the 59th ranked PC company, with many major business houses having entered this new and exciting space. Many could not keep up with the pace of the computing industry and quit. We stayed because we’re always on. And now we’re the 2nd largest PC company in India.
We refuse to rest on our laurels. We’re always on because we’re only as good as the latest technology.
Have a look at the product section to see our range of products.

MANUFACTURING AND THE ENVIRONMENT

OVER A MILLION CUSTOMERS IN INDIA AND ABROAD

THE CHOICE FOR THE TOP CORPORATES

Get Directions
www.indiamart.com/zenith-computers
View Mobile No.
Call +91-9363261427
Send SMS
Send Email
Tell us what you
need
Receive seller
details
Seal the deal
Save time! Get Best Deal
I agree to the terms and privacy policy