We have gained expertise in delivering a quality-approved range of agricultural products to the patrons Castor Seeds. These seeds are used for various medicinal purposes in treating rheumatic and other skin disorders. Our range of Castor Seeds are extremely pure and available in various packing to meet the exact requirements of our clients. Procured from reliable vendors across the nation, our range is appreciated for its high yielding capacity, resistance to pests and other qualitative features. Furthermore, we make sure to offer the range at leading industry rates. 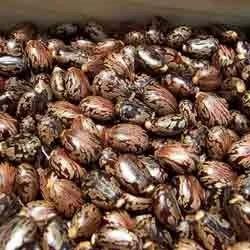 India is the world's largest producer of Castor Seeds and meets most of the global demand for castor oil. India contributes 750,000 tonnes annually, and accounting for over 60% of the entire global production.

The shiny seeds of Castor have very beautiful and intricate designs. At one end there is a small, spongy structure called the caruncle, which aids in the absorption of water when the seeds are planted. Like human faces, finger prints or the spots on a leopard, no two seeds have exactly the same pattern. Castor is an important non-edible oilseed crop and is grown especially in arid and semi arid region. It is originated in the tropical belt of both India and Africa. It is cultivated in 30 different countries on commercial scale, of which India, China, Brazil, USSR, Thailand Ethiopia and Philippines are major castor growing countries and accounts about 88 per cent of the world's production.

Castor Seeds are widely used for treating rheumatism, skin disorders, dandruff and constipation. It is a source of castor oil which has a variety of medicinal and non medicinal uses.