With thorough knowledge of the market, we have been able to establish ourselves as a reputed organization offering Peanut Kernels. All our products are cultivated as well as processed under hygienic conditions as per industry laid norms and guidelines. The products we offer are widely applauded in the market for their freshness, quality and high nutritional value. Extensively used as oil seed and substitute of any oilseed, these are offered as per the needs of our valuable clients.

Owing to the profound experience of the market, we have been able to come up with a remarkable variety of Java Peanut Kernels. These peanuts are cultivated and harvested using latest techniques as per industry laid standard and guidelines. The product we offer is a good source of protein, carbohydrate and extensively used to prepare various food products and medicines. 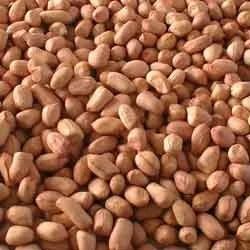 Peanuts are one of the most important oil seeds crops and snack foods in the world Agro-food trade market. It is the major oilseed of India. It accounts for around 25% of the total oilseed production of the country. Annual production of Indian Peanuts and Indian Peanuts oil are around 5-8 million tons and 1.5 million tons respectively. Peanuts are rich in nutrients, providing over 30 essential nutrients. Peanuts are a good source of niacin, fiber, magnesium, vitamin E, manganese and phosphorus. They also are naturally free of trans-fats and sodium, and contain about 25% protein.

The edible seeds of this annual legume plant start above the ground but mature underground. Peanuts are also known as ground peas or groundnuts. They are known by many other local names such as Earth Nuts, Groundnuts, Goober Peas, Monkey Nuts, Pygmy Nuts and Pig Nuts. Despite its name and appearance, the peanut is not a nut, but rather a legume.

Peanuts have many uses. They can be eaten raw, used in recipes, made into solvents, used in cosmetics, medicines and textile materials. They can be consumed in various forms such as Boiled peanuts, peanut butter, peanut flour, roasted peanuts, salted peanuts and peanut oil.

They are often a major ingredient in mixed nuts because of their inexpensiveness compared to Brazil Nuts, Cashew Nuts, walnuts, and so on.