Offering you a complete choice of products which include Vishwa 0.4 To 2.0V Environmental Monitoring System. 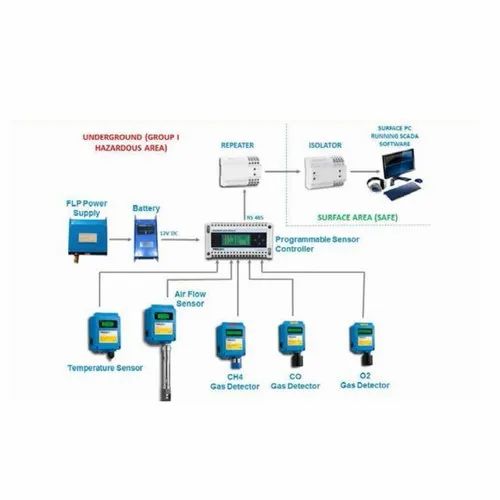 Outstation/Underground Remote Station: Programmable Sensor Controller (Model –TX9042) acts as the outstation which is a low cost Telemetry unit designed to provide analogue and digital monitoring, pilot circuit interlocking and control. This is an Intrinsically Safe, dustproof and waterproof Unit. It accepts the analogue voltage signal (0.4 to 2.0V) from different sensors. It has an inbuilt RS-485 port which sends this information to the computer via Transmission hardware/Repeater & Barrier/Isolator.

Sensors & Associated Units: The Sensors (CO, Methane etc.) sense the particular parameter and convert them into proportionate analogue voltage signal (0.4 to 2.0 volt). These signals are fed to the Outstation (Programmable Sensor controller), which in-turn convert these signals into digital form and then sends to the surface computer for data logging and display on the monitor.